Councillor Jeff Leiper is consulting about what to do with Cash-in-lieu funds (rather than setting aside some land for a park, developers pay cash). What should we do to improve our park?

Have a look at https://kitchissippiward.ca/content/plan-your-parks-kitchissippi-parks-participatory-plan-consultation to see what each round of consultations is about. 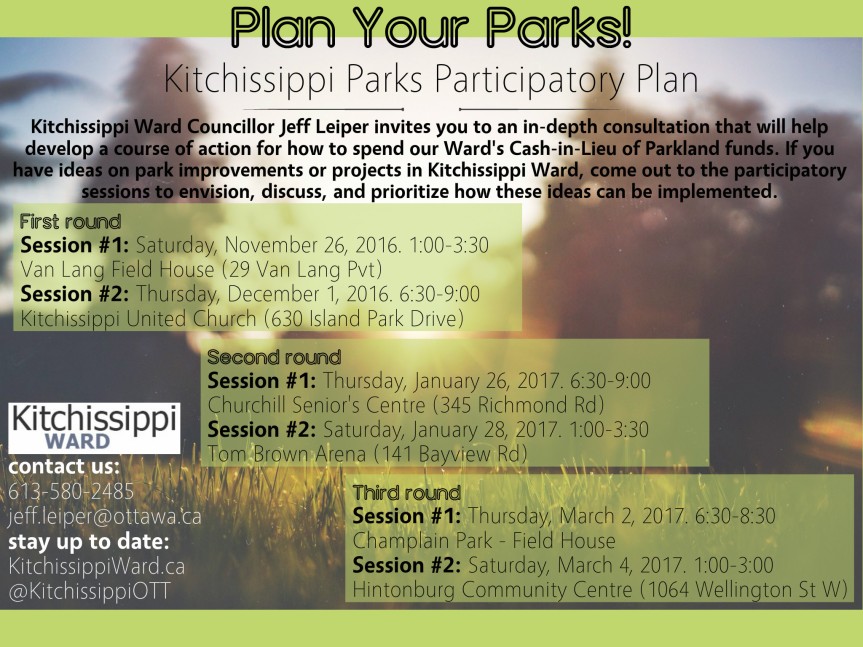 Closing date for Councillor receiving your comments is October 31, 2016.

We would like to give a big thank-you to all those who made it to our best attended community meeting on September 27, 2016 with Councillor Jeff Leiper, discussing the proposed park land expansion within Champlain Park, involving the closure and conversion of a portion of Pontiac street.

On the following Thursday and Friday after the meeting, Jeff did his own traffic survey of the traffic flow along the part of Pontiac Street in question. Below is a snippet of Jeff’s traffic survey counts which were published in his weekly Kitchissipi Ward Newsletter. For the complete article of Jeff’s observations, comments and counts regarding this proposal, please see his newsletter at: http://kitchissippiward.ca/content/update-potential-pontiac-closure

Traffic counts (snippet from Jeff’s Kitchissippi Ward Newsletter – October 1)
On Thursday morning, I did a count from 7:30 to 9:15 am.
On Pontiac westbound I observed:
From Northwestern: 9 vehicles, of which 8 had kids visible
From Carleton: 14 vehicles, of which 10 had kids visible and one bus
4 bikes
10 pedestrians
On Pontiac eastbound I observed:
One vehicle – a resident of the Keyworth/Cowley block
One vehicle from Cowley
12 vehicles from Keyworth, of which 4 were buses
7 vehicles from Patricia, of which 1 was a bus
33 bikes
6 pedestrians
On Friday, I was out from 3:15-5:05 and counted on Pontiac in the stretch we’re floating closing:
15 cars westbound that came from Northwestern
4 cars westbound that came from Carleton
17 cars eastbound from Cowley. My impression is that these were almost all Tunney’s parkers.
17 cars eastbound from Keyworth, including 7 that had a child visible in the car (my assumption is that these are pick-ups from the school), and 3 buses
10 cars eastbound from Patricia, including 6 that had a child visible in the car (again, I’m making an assumption of pick-ups)
2 bikes eastbound, and 15 bikes westbound
14 pedestrians eastbound, and 25 pedestrians westbound. As you might imagine, a very large number of these westbound pedestrians looked like they were headed to their car from Tunney’s Pasture.
As an observation, the school rush lasts for about 10 minutes immediately after the bell. Traffic is extremely light outside of that period.

Councillors next update
Jeff Leiper will be updating the Community on this proposal in a mid-November time-frame after he has received additional community comments and made further consultations.  Jeff has also done a preliminary discussion of the proposal with the City and he found there were no infrastructure issues and that there may be funding options available through grants.

October 31, 2016  – Closing date for receiving your comments
We strongly encouraged you to send your comments if you haven’t already done so before the closing date to: Councillor Jeff Leiper  Jeff.Leiper@Ottawa.ca The Champlain Park Hockey League will celebrate its 25th anniversary, with a game of shinny on the ice at Champlain Park outdoor rink on January 19th at 10 am (weather permitting).

Alumni & would-be players are welcome (especially those over 40).