Many Thanks to Volunteers for Halloween Dress-up Fun Run 2019

Here’s a message from Peter Laughton, the event organizer:

A huge thank-you to all who came out to run this past Saturday morning in our annual Halloween Dress-up run. The weather cooperated and as a result we had over 50 costumed participants.

The incredible generosity of those in attendance allowed us to raise $677.00 for OSS Basketball and JUMPSTART charities for young players in financial need.

Thanks to everyone in the Champlain Community Association for all your support, including promotion on the website and the Speaker, allowing us to use the field-house, and sponsorship of the run through food and prizes. Thanks to Bushtukah for the tent and prizes. Thanks to Jordan Clark from Shoppers Drug Mart for the food. Thanks as well to the volunteer de-pavers who allowed us to run across the new opening at Pontiac and to the dedicated volunteers who have taken over the management and stewardship of our beautiful Champlain Woods!

Looking forward to seeing everyone again next year and Happy Halloween!

Large turnout of families in Halloween costumes preparing for start of run at Champlain Park.

This one-year old in fighter pilot costume certainly stole the show for participation by runners under 5 ! 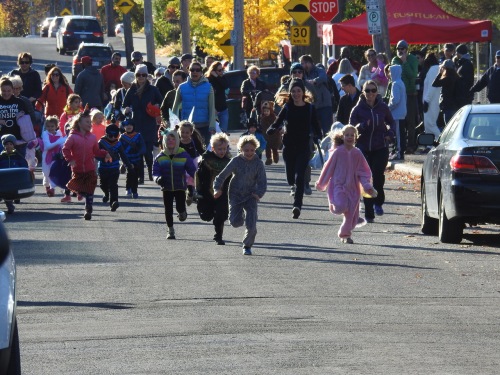 Many happy faces on runners 5 and up, despite their costumes, as they race down Carleton Ave. towards the river.

OSS u14 girls basketball team who volunteered as marshalls on the race route shared donations from participants with Jumpstart organization.

This entry was posted in Hallowe'en and tagged Champlain Park Halloween Run. Bookmark the permalink.